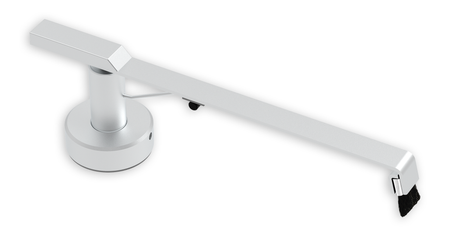 Record brooms have been around since the early 1970s. Some of them do a good job, some rather not. In many cases the brush rushes towards the middle of the platter, running out of sync with the tonearm. This phenomenon is known as skating. Recent developments aim to tackle this problem. Here the highly efficient neodymium magnet comes into play. These magnets are used to stabilize the record broom of the Sweep it S2. Sweep it S2 is constructed in collaboration with Klaus Mick and uses his patented technology to stabilize the record broom. Extensive theoretical and empirical research has been put into the development of this product.
The magnetic attraction between the neodymium magnet – based in the top part of the cylinder – and  the [Fe] core/counterweight stabilizes the record brush. Moreover, the distance between the neodymium magnet and  the [Fe] core/counterweight is carefully chosen to ensure a specific magnetic stabilization force. As the aluminium of the brusharm is paramagnetic, it acts like an additional space between the neodymium magnet and  the [Fe] core/counterweight.
Sweep it S2 is height adjustable within a range of about 1cm. The position can be locked with the set screw on the base. With this mechanism, it is possible to adjust the height of the arm of the record broom in order to align it horizontally with the platter. A correct horizontal alignment ensures the correct tracking force of about 6g.

The record broom can be placed in one of two left hand side corners of the turntable. The placement is depending on the type and shape of your turntable. At the optimal position the brush should align with the spindle (i.e. the center of the platter). Deviations (relative to the spindle) between 1,5 to 2 cm are well compensated by design of the Sweep it S2. Higher deviations can cause more drastic skating effects.

– No feedback has been given for Pro-Ject Sweep it S2 Magnetically Stabilized Record Broom Silver. –
Rate item